How to toast bread in different ways without a toaster: Pan or oven 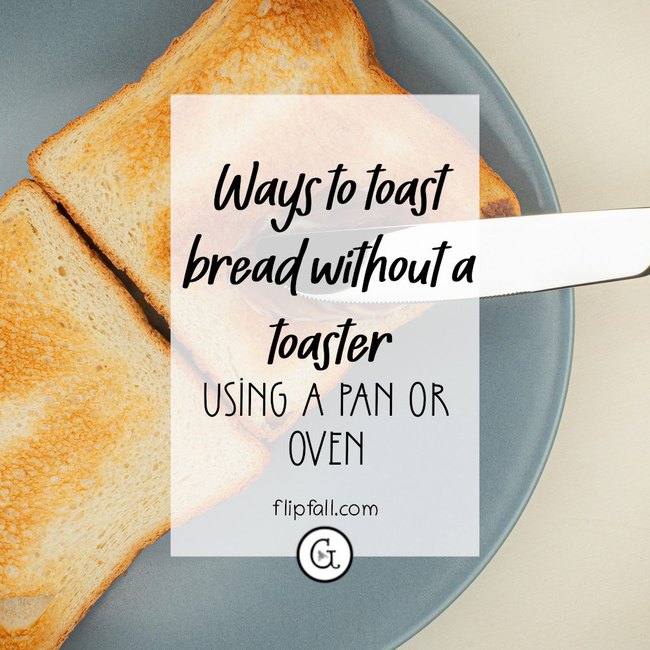 While the simplest way of toasting bread is to just put it in a standard toaster, there are other ways of doing it.

How to toast bread in the oven

This is ideal if you are fixing toast for a crowd. Simply move the oven rack to the topmost position and set the oven to low broil. Arrange your toast bread slices on a large cookie tray (I like using bakeware with an edge to it so the toast doesn’t slip off when taking it out).

Put it in oven, leaving the oven door ajar. Times vary depending on your specific oven’s broiler setting, so keep an eye on it. About halfway through the cooking process, turn the bread over so it can toast evenly.

How to toast bread in a pan

I like to do this by lightly buttering both sides of the toast bread. Heat a non-stick pan over medium-high heat on the stove, then put the buttered toast bread in. Watch carefully to avoid burning. It should take less than 5 minutes for one side to be done, then flip over and cook on other side.

Voila – your toast is ready and pre-buttered.

Bread to use for toast

While you can use standard pre-cut bread, you’re not limited to that if you’re toasting bread in the oven or pan. Instead, consider using a loaf of crusty bread from the bakery section of the supermarket. Cut your own slices, toast the bread in the oven or pan, top with one of our fast easy topping ideas, and you’ve got some gourmet toast ready to go!

Tried and tested: How to make lasagna ahead of time with no-cook pasta

Are you feeding a crowd the next day? Do you need to prepare lasagna ahead of time with no-cook pasta strips and not sure how that would work? Good news: you’re in the right place; we have a clear answer for you.

Here are some tips for fast grocery shopping so you have more time for other things in life. Enjoy!